Many, Many More Starts

The cursor blinked on the screen in front of me. I read the words that I'd taken from fragments and pieced together into a coherent whole yet again. And still the cursor blinked at me mockingly. I thought about what I should do and yet I had no answers. I read the words again - it was my life that appeared before me on the screen, but even though I'd lived it, the words shocked me a little. I discovered a tear streaking down my cheek, yet more tears in a year that was filled with them.

I couldn't read those words again, so by impulse I pushed the publish button and there it was, my thoughts on a blog that with a little work anyone could find. It would take work though, and if I told no one, no one would know it was me.

So now I stared at a screen that contained my first published entry and somehow I had survived that little impulse. And I read the words again as they appeared in the new format and I cried once more.  I had felt myself regressing for a few weeks. I was no where near the level of the woman that appeared on the post, but I was in more than a funk, I was depressed again. All my work, all my struggle and all I'd really done was walk in a circle back to the starting line. I couldn't be that girl on the page again, I just couldn't. I wouldn't. And surprise, again there were tears.

And as I cried I felt a nagging at the corners of my mind that told me what I needed to do, but I had no idea why it was telling me to do that. I couldn't do what it was telling me, no way, no how. But the mind is a mysterious machine and it kept circling back to the same answer. My stomach was in knots. The tears were endless. And yet the answer to my dilemma seemed to be the same.

And so I stared again at the computer screen and I let my finger hover one last moment over the key. Should I? Could I? And then with a collective "f" it, I hit the share on facebook button. It was done, I could take it back, but not ever be entirely sure that no one would have read it. What was done, was done. I emailed a link to the blog to a few of my friends. I'd done it. I had no idea why, but I had. I'd shared the story of my breakdown and my diagnosis with the people in my world. For better or worse everyone that choose to read it would know that I was a mess. The facade was gone, the acting done - I was now a bulimic with severe depression that had sunk so low that I had at times not gotten out of bed and wondered if life was worth carrying on with any longer. Maybe no one would read it.

But then the responses began and I was overwhelmed again, but not in the way that I had expected. The words were not ones I would have used: "bold," "beautiful," "well-written," "brave," "honest," "wow," "strong," "inspired," "eloquent" ... Was this really words people were using to describe me and what I'd written? I wasn't any of those things. I didn't feel like I was any of them either. My inbox kept receiving messages from people that offered their own personal stories, ones that they weren't usually sharing with the world.  I was overwhelmed. I read every comment and email with tears in my eyes. I had no idea the response would be like this.

And spurred on by the kind, eloquent, bold words from my honest, strong and inspired friends, I began to write about what happened next and after that and on and on it went. Talking about the experience in a coffee shop with a friend one day, I made the connection about why I needed to do what I did that day. I now understood the nagging voice. I now knew why I had to not only write, but share my story with the world. I'd talked, contemplated and preached the gospel of being real, of revealing myself to the world, of finally being me with the people that mattered and this was my way of doing that. And in the process it was the last step of my therapy to get me past this phase in my life. And in discovering that I always knew there would be an end. Eventually I'd catch up with life and a lot of my secrets would be out there for all to see. I was no longer embarrassed to be struggling - I'd learned that there were a lot of people in the world, my world, that were or did or had - I wasn't special, I was one of many.

And now people know the story. They know me. They know my demons. And still after all of that they are my friends. I don't have to hide anymore.

And so I face the next adventure and I get another start. I get to face the beginning ... once again.
Posted by Thoughts & Musings at 7:19 PM 2 comments:

The Brain is the Most Fragile Organ

One, two, three, four times and I caught myself .

"What are you doing?," I asked. "Don't let yourself go down this path again," I scolded. And then a small nagging voice in the corner of my mind said "See, you knew that you'd never be better." 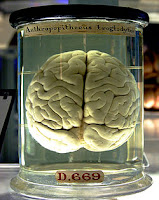 But at least this time I noticed the signs and it didn't take me so long to see them. I tried to cling to that small ray of hope - now I know where I don't want to be and the small signs that I might go down that path again. And where did I discover all this? On a gray late January day as I lay in bed still in my pajamas at 3 p.m. And what did I discover? I realized that I was again sleeping all day and evading life. If I had something to do I would dress and get out of bed and happily migrate into the world, but if the day wasn't filled with an adventure I stayed in bed and slept and slept and slept.

The first day that I didn't get out of bed I figured I just wasn't feeling well.  I think I used the same excuse the second instance as well. I wasn't really fooling myself that time. And after a period of insomnia I didn't dwell on the indiscretion too much, until I realized that it didn't change the fact that sleeping all day was no better than never sleeping either.

And so I drug myself from my bed, forced myself to put on some clothes and I sat my weary body on the sofa and I forced myself to write out what was distressing me. There were so many things that streamed out of my mind as my fingers tapped out the words on the keyboard. Seeing them made a difference. They helped me sort out the mess that was stirring around in my mind. The clutter took order as my thoughts crept out of my brain, through my fingertips and onto the screen of my laptop. And as it had so many times in my life, the writing made me feel better. And as I had marveled in the past, the brain really is so complicated and so fragile and so adaptable and so strong all at the same time; and in it is all the answers when we look for them.

So now staring back at me were a mass of words and run-on sentences. Clearly reasoned statements stared back at me from among a rubble fragments. All of it reflective of what was keeping me in bed. All of it the remnants of my overly cluttered mind. And what I knew was that no amount of thinking or talking or musing would ever replace the writing process for me - nothing organized the thoughts that I didn't know I had in the same way as writing them down did. Nowhere else did my brain seem to make the same connections with the past, present and future as it did when it was composing my thoughts.

And simple as that - my reasons for staying in bed and sleeping away my life again - were staring back at me.

So much had happened to me in such a relatively short amount of time, this regression should not have been unexpected really. In six months I had had a major breakdown brought about from the bottom finally falling out of major depressive disorder that I'd suffered for more than a year. I finally faced head-on that I was more than an emotional eater - I had a full-blown eating disorder. I had finally given up all my trepidations and stereotypes about people that went through therapy and visited one myself. I'd met, lost and then restored a friendship with someone that had somehow accepted me for me. I had separated myself from an abusive relationship - my job. I had contemplated life's most difficult questions. I had started a jewelry business. I had decided what I wanted to be when I grew up. I had started to slowly let people in my life see the real me. I had publicly declared a year of me which had pressure all of it's own with which to live up. I was learning how to react productively when people said horrible things to me that in the past I would have internalized. I was looking at the beginning of a new freelancing venture which frightened me. I was financially unstable since I hadn't been working much. I had committed that I would move to a new city by the end of the summer. I had expected that I would have, even in this tough economy, to have found my dream career already. I was even sure that there was more, but looking at all I'd faced and encountered in the recent past, I realized that I had to give myself a break - I was doing the best that I could during a period of great transition in my life.

But from all of that one thing stood out most in all that I had typed. I looked back at it and thought about how the mind is really a miraculous mystery that hides sometimes from us so much and yet reveals it when we are ready to see it.

"I finally like myself enough to care that there was a small sign that I might be slipping back into depression."
Posted by Thoughts & Musings at 8:22 AM No comments: