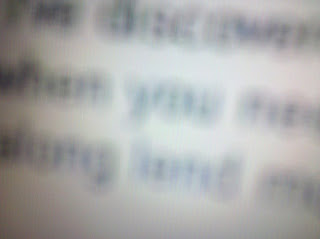 A few years ago one of my friends, knowing that she inevitably needed glasses, had asked me to go along with her to her appointment. Since I needed to go as well I scheduled an appointment for both of us and for some reason of misunderstanding on the part of staff they had separated us into different rooms. So I listened from across the hall as the optician asked "which is better 1 or 2, now a or b ..." And then I heard my friend tell her that wow that one is really bad to which the doctor replied "honey, that's your own eyes we are done with the exam." And as many times as that story has been used as a punch line it holds a more profound lesson - in the midst of things sometimes we only realize how bad things are when we are coming out on the other side. Once things begin to come into focus we look back and think "wow, my vision / life really was blurry beyond what I realized." And as I began facing the holiday season and the coming new year that's what I began to discover - I was flipping between the "a's" and "b's" and the "1's" and "2's" and I was finally seeing that my life was coming into focus again. With the new prescription for living the way I wanted to and a new attitude I was coming out on the other side of a great depression.
Slowly through coffees and dinners with friends, phone calls, emails and the like I was beginning to tell more and more people where I had been and I how I was pulling myself up from it to become the new, improved me. I wasn't where I needed to be yet and I wasn't selling my story to the world, but as it came up or if people asked the right questions I wasn't hiding the facts anymore. And slowly in that time I was beginning to value the people that were in my life. No matter how many mistakes I had made or how far I'd fallen into depression during the years I had done a pretty good job of surrounding myself with some very incredible people. One of the things that I'd resolved to do was to try to be one of those people that offered the option of a helping hand for anyone that needed to take it. If only once in my life I was the person that was there when someone most needed it without knowing that I had made a difference on a day they needed it I would meet my goal, but hopefully I'd do even better than that.
So as Thanksgiving neared I decided I needed to reflect on the things that I was actually thankful for this year. And when I looked at my life - jobless, moneyless and still a little mindless - what I saw the most was a lot of incredible people that had no idea what things they had done - small and large - to help me through all of which I had been encountering. And as I thought about how special some of the things they had done were, even when they didn't realize that they were even doing what I most needed, I decided in the spirit of the day I needed to thank a lot of them. Sometimes it was as simple as a funny comment someone uttered that made me smile when I no longer realized that I could. Or it was a group rallying to my side when I'd said I had a bad day - not asking for anything in return - but just letting me know that I had a cheering section. Or it was someone sitting across from me at a table at a coffee shop exploring where are lives where going as we communicated our thoughts and fears and admiration  as her kids played around us obviously bored with our longwindedness, but not abandoning me when she knew I needed the confident. Or an out-of-the-blue text that just said someone was thinking about me.  And sometimes it was someone telling me without any thought or reservation that if I needed to I had a home with him, he'd never let me be homeless.
So, as the blurriness was fading and I was reflecting more and more I went through my list of friends and thought about what each and everyone of them meant to me. And I composed a short email to share with them on Thanksgiving since it seemed the natural day to thank people. It was a small start to acknowledging where I was and how close I was to finally "seeing" again.
And so I sent the following Thanksgiving letter to a selection of people that may or may not have known what I was experiencing. For many of them they would have no idea what was really inspiring my thoughts, but I still felt like it was the first step that I needed to take in  acknowledging the gifts that people had given me and  in coming clean about where I was, who I was and where I was going. And so I quickly  pressed the send key before I started to focus too much and chicken out. It wasn't like I was telling the world that I was sick, even though my mind was, but it was a step to telling some people that might not guess that my life had not been easy the past year.

" It was a struggle this year when facing a day dedicated to giving thanks when there has been so much to be despondent about this year. It inspires more contemplation, more soul-searching and more digging to find something for which you can say - 'for this I am truly happy.' But in all actuality I shouldn't have had to look far, because in this time I've discovered that sometimes there are people that you would never have known could be so wonderful. New people appear in your life when you need them most, old friends decide to pick that time to reconnect and the friends that have been there all along lend more support than they realize.

So, on this day of thanks, I want each of you to know that my list this year may be small, but the gift that is there is far greater than any for which I could hope. For, that inventory, well it's filled with each of you that make my days in ways that you know and may not even fathom.

I love you all for the strength, hope and support you provide me. I only hope that one day I will be able to repay the favor in even a small way.
...
Happy Thanksgiving Everyone! "


It was only a start to telling the truth - to seeing how out of focus I had been - but it was a start and sometimes just beginning to see the letters and shapes and colors and numbers with only a little blurriness around the edges has to count for something. Some days seeing how bad your vision was and how good it can be is the best gift you can be given and I was thankful that the fuzzy edges were beginning to become clear again. It was like I'd too taken an eye exam and I was just waiting for those new, perfect lenses to arrive.
Posted by Thoughts & Musings at 12:13 AM